skip to main | skip to sidebar

Moving to the Country…The Finances

As promised here is a little update on the finances of our move to the country. As you’ll see below this move is being done solely for lifestyle reasons and is certainly not financial motivated in any way.

My wife is on maternity leave for the next 2 months so the move will have no impact on what she brings in (in the short term). However, she works in a field that is in demand everywhere and she doesn’t anticipate having any trouble finding work once her maternity leave is up. However, it’s a different story for me as I currently work in a specific area of technology that doesn’t exist up north. Luckily for me I do have some other skills to bring to the table and was able to get a part-job in Information Systems for a government organization. My new hourly wage will be considerably below what I currently make and accounting for the lower wage and reduced hours I will probably be taking around a 65 to 70% pay cut. However, for what it’s worth my actual take home pay will probably be about 40% of my current take home due to less taxes, benefits and pension contributions.

On the plus side I’m still under thirty, live where I want, in the house that I want, and for all intents and purposes am semi-retired.
Posted by Middle Class Millionaire at 7:18 PM 22 comments:

The below chart illustrates the importance of investing early and the power of compounding interest. When it comes to investing time really is on your side.

You have probably seen similar charts on the front of mutual advertisements and although I’m not a huge proponent of mutual funds I think the underlying message is valid---The earlier you start investing the better.
Posted by Middle Class Millionaire at 9:47 AM 15 comments:

ABOUT BORALEX
Created in February 2002, Boralex Power Income Fund (the “Fund”) is an unincorporated open-ended trust that indirectly owns ten power generating stations with a total installed capacity of 190.0 MW. Eight of these power stations are located in Quebec (Canada) and two are in the State of New York (United States).

FINANCIAL HIGHLIGHTS
-14% Yield
-expected 2008 payout ratio of 95%
-trading at approximately 30% below it’s book value.
-estimated 2008 PE – 11.5X
-estimated 2009 PE – 11.6X
-Trading at 6.5X cash flow.
-Current Ratio of 2.11
-TDWaterhouse rates them a high risk HOLD and have a one year target price of $6
-DBRS Stability Rating of STA-2(low)
-S&P Stability Rating of SR-2/stable
-DBRS Long-Term Debt Rating of BBB
-Have long term power purchase agreements at all 10 of their locations with contracts expiring between 2012 and 2035.
-Distributions are tax friendly. Approximately 48% of the distribution is return of capital, 31% dividend income, 18% taxable income, 3% capital gains.
-They are a small player in the power generation industry (225 million market cap) and trading below their book value. If they are able to resolve some of their biomass and hydrology issues they would become an attractive takeover candidate.

RISKS
-2007 was a very rough year for BPT.UN. The fund has suffered a number of setbacks in addition to the general malaise of the power generation industry. As a result they have seen their unit price plummeted from a 52 week high of about $11 to it’s current price of around $5.
-In order to increase their financial flexibility and maintain their emergency cash reserves the distribution was recently cut by 22% from 90 cents a unit to 70 cents a unit.
-The weak results in 2007 were primarily caused by the following 3 issues: a weakening U.S dollar, problems sourcing a cheap supply of biomass fuel and below average hydrology. How will these issues affect their results in 2008?

WEAK US DOLLAR
I believe that the weakening of the U.S dollar will continue in 2008 however, I’m not anticipating as large of a move as in 2007.

HYDROLOGY
This is anyone’s guess. Like the weather we won’t know until it happens. It may be below average again in 2008 or it may be above however, over time it should revert to the mean.

[As always please do your own research and consult your own financial advisor before making any decisions.]
Posted by Middle Class Millionaire at 6:28 AM 47 comments:

With the end of the tax season approaching I’ve been asked a few times about how to account for capital gains as a result of the sale of income trusts. Well, the process is basically the same as with common shares except with income trusts the cumulative “return of capital” (ROC) received from distributions must be accounted for in the adjusted cost base (ACB).

What is Return of Capital?
Basically return of capital is the tax deferred portion of income trust distributions. Return of capital can also be described as money the trust gives back to you from your original investment. The exact amount of ROC is provided to you annually by the trust.

What Do You Do With The ROC?
Once you’ve calculated the cumulative ROC you use it to re-calculate your ACB, which will be used to calculate your taxable capital gain when you sell. For example, suppose you paid $10 a unit and received a $1 per unit return of capital. Your adjusted cost base would be $9 ($10 - $1 = $9). Now if you sold that income trust for $12/unit your capital gain would be $3 dollars a share ($12 - $9 = $3) because your cost base was reduced from $10 to $9 due to some of your capital being returned in the form of a distribution. As is the case with common shares, only 50% of the capital gain on income trusts are taxed.

[I’m not an accountant so please consult your own tax professional before implementing any of the above advice.]
Posted by Middle Class Millionaire at 10:57 AM 124 comments:

The Secret to Financial Success

Many people have the view that finances and investing is some kind of mystical puzzle that once solved will instantly eliminate all their financial troubles. The code will be broken and the chest of gold will fly open (just watch any late night infomercial). In my opinion the notion of a financial quick fix is the most dangerous and damaging perspective that anyone can have. Having this view effectively removes individuals from their current financial problems. It rationalizes the belief that you don’t have to diligently and effectively manage your money because once you figure the secret out everything will be OK.

Well the secret is out...that’s really all there is to it.
Posted by Middle Class Millionaire at 8:14 AM 20 comments:

In typical fashion Johnson & Johnson announced that they have once again beat analyst consensus earnings estimates. Their quarterly earnings came in at $1.26/share, 6 cents above analyst estimates of $1.20/share. However, their two major businesses, pharmaceuticals and medical devices, would have experienced declines had it not been for the weak American dollar.

The recent increase in earnings due to currency is viewed as a negative by many analysts however, as an investor it helps to reaffirm one aspect of my investing strategy. One of the criteria that I used to select the U.S names in my portfolio is their international exposure. Over a year ago when I first initiated a position in JNJ I stated that one of the reason that I bought was that 44% of their sales were from outside of North America which would act as a built-in currency hedge. It works like this: JNJ reports their earnings in U.S dollars so the 44% of their revenue that was generated outside of the U.S. has to be converted back to American dollars for accounting purposes. This of course would inflate their international earnings as the U.S dollar falls and conversely shrink them as the U.S dollar rises.
Posted by Middle Class Millionaire at 6:34 AM 74 comments:

For the last five years Mrs. Middle Class Millionaire and myself have been talking about selling our house in the city and moving back to our very very rural home town. Well...the talking is over and over the course of this month we’ll be packing up all our stuff and making the 350km trip straight north. Long time readers of this blog will remember that last year I purchased a recreation property up north well we’ve decided that we’re going to be moving there permanently. Here are some of the details below:

ABOUT THE HOUSE
-located at the end of a dirt road.
-no cell phone or high speed internet service (looking into satellite internet)
-30 minute drive to “town” which is where we would have to work.
-our backyard is now 60acres which is surrounded by 1000’s of acres of crown land.
-land has 2 stream fed trout ponds.
-house is smaller than our current home (we plan to put an addition on sometime in the future).
-house is only 20 years old and very structurally sound (new roof, solid foundation) but aesthetically the inside of the house needs work as it’s very dated. Every room will have to be re-done to “make it nice” but the whole house is currently functional.
-the house already has a new well and new septic.
-has a detached garage that needs siding a new roof.

It is a drastically different lifestyle and community than where we live now. However, both my wife and I grew up there so we know exactly what we’re getting into. Stay tuned because sometime in the next week I’ll get to the part everyone wants to read about the finances...
Posted by Middle Class Millionaire at 7:42 AM 47 comments:

If Only You Had the Inside Scoop

Bought too early? Sold too soon? Should have seen it coming? Well don’t feel too bad, here’s a list compiled by Micheal Brush of MSN Money of some of the biggest insider mistakes of 2007. 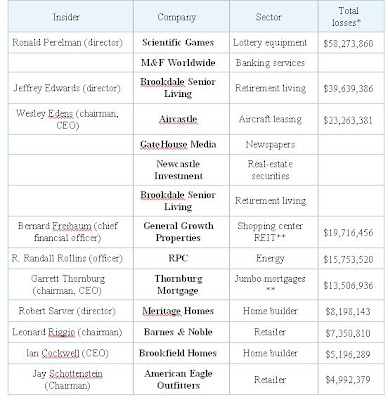 *The losses above were as of Jan 18, 2008. As we know the market hasn’t performed well this year so many of the above losses are potentially much higher.
Posted by Middle Class Millionaire at 6:43 AM 35 comments:

Toyota - Soon to be the Worlds Biggest Car Maker?

Toyota’s strategy of shifting their focus to emerging markets seems to be paying off as they are now expected to surpass GM in annual sales by the end of 2008 making them the world’s largest automaker.

According to an article by Martin Foster in the New York times.

"While sales declined in North America, they increased in Asia, especially in Indonesia and Thailand, and in other regions including South and Central America, Africa and Oceania.

In the nine months through December, less than half of Toyota sales came from its showrooms in North America.

Sales to North America slid to 44 percent from 57 percent a year earlier, while Asian sales rose to 25 percent from 15 percent."

As a consumer it’s no surprise that GM is about to be bumped from the #1 spot. I am by no means a picky shopper but for me it’s basically at the point that when I’m car shopping I don’t even bother looking at North American cars anymore. My reason for this is simple…I want to own a car that isn’t going to break down and from experience and the experiences of people I know GM can’t seem to meet my single criteria.
Posted by Middle Class Millionaire at 6:41 AM 25 comments:

I just realized that yesterday marked the 200th post here at Middle Class Millionaire so I just wanted to take today’s post to thank the readers of this blog for their continued support and readership. I would also like to thank the regular commenters who not only keep me honest but also provide some added depth and perspective to many of the posts.

Cheers,
MCM
Posted by Middle Class Millionaire at 7:03 AM 191 comments:

There were no changes to my portfolio over the last month – no buys, no sells.
Posted by Middle Class Millionaire at 7:22 AM 138 comments:

In a reader or via E-mail

Now there is new and most secure way for global money transfer . Make an online transfer to friends and family using visa prepaid card.